The US pioneered work in supercomputers decades ago, but the most powerful systems have resided in China for several years. That’s changing today with the unveiling of Summit, a new supercomputer from IBM and the US Department of Energy’s Oak Ridge National Laboratory (ORNL). It’s an order of magnitude more powerful than current US supercomputers and fast enough to beat every other system in the world with a theoretical peak performance of 200 petaflops per second. More than that, it has the hardware to support machine learning and artificial intelligence processing on a previously unheard of scale.

ORNL has spent the last couple years building Summit because of how ludicrously complex and powerful it is. Summit consists of 4,608 computer servers, each of which packs some serious processing power. A single server in the Summit array has two IBM Power9 CPUs with 22 processing cores. That’s over 200,000 CPU cores across all of Summit, and they’re paired with more than 10 petabytes of RAM. 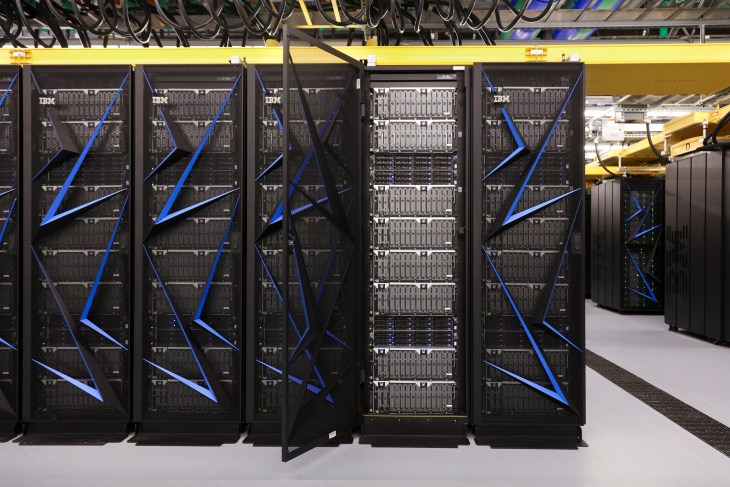 Each server in Summit also contains six Nvidia Tesla V100 GPUs, which are data center chips based on the Volta architecture (i.e. you can’t pop one in your PC). That works out to 27,648 individual GPUs powering Summit. These GPUs include dedicated Tensor Core hardware for machine learning as well. According to Nvidia, the GPUs in Summit account for 95 percent of its processing capacity.

The raw processing power isn’t the only thing that makes Summit impressive. The AI-enabled hardware of Summit will allow researchers to train and operate neural networks and process massive data sets. IBM and Oak Ridge National Laboratory expect scientists to clamor for time on the new supercomputer. ORNL says Summit already has a full schedule including work on cancer research, fusion energy, and addiction treatment.

The previous top supercomputer in the US, known as Titan, is also an ORNL project. This machine features a Nvidia GPU in every node, which was unusual at the time. It has a peak performance of about 27 petaflops per second. The top supercomputer on Earth before Summit was the Chinese Sunway TaihuLight system. It has a max capacity of 125 petaflops per second. At 200 petaflops, Summit beats it by a comfortable margin.

The Department of Energy is also working on a smaller version of Summit called Sierra. This supercomputer will have “only” four V100 GPUs per node for a maximum processing capacity of around 125 petaflops. Sierra should be online at Lawrence Livermore National Laboratory later this year.