The discovery of a dark ribbon of weak hydrogen ion emissions that encircles Jupiter has overturned previous thinking about the giant planet’s magnetic equator.

An international team of scientists led by the University of Leicester has identified the weakened ribbon of H3+ emissions near the jovigraphic equator using the NSFCam instrument at the NASA InfraRed Telescope Facility, the first evidence of a localised ionospheric interaction with Jupiter’s magnetic field.

This movie shows a projection of the map of Jupiter’s ionosphere, allowing us to look at the ionosphere as the planet rotates as it would be seen from Earth. The map begins with Jupiter’s bright aurora showing, but as the planet rotates, we show weaker and weaker emission, so that these aurora saturate, allowing us to see the much weaker features near the equator. We highlight the Great Cold Spot our team previously discovered, as well as the location of Jupiter’s magnetic equator, but the map also shows a wide variety of other bright and dark regions.

The study is published online by Nature Astronomy today (23 July).

This latest study has opened up the entire ionosphere for investigation and suggests that Jupiter’s ionosphere is as complex as our observations are able to measure with levels of details still yet to be revealed. It also demonstrates that, despite the differences in their size and structure, both Earth and Jupiter have a similar localised ribbon that winds its way around the magnetic equator of the planet.

Read More: What Would Happen If Humans Tried To Land On Jupiter?

The ionosphere is the ionized part of Jupiter’s upper atmosphere. Here, collisions between photoelectrons and H2 are a significant source of H3+ ions.

One explanation for the dark ribbon is that because electrons preferentially travel along magnetic field lines, these photoelectrons are diverted to higher latitudes from the magnetic equator as they move to lower altitudes – leaving behind the ribbon of reduced H3+ production.

Recent data from NASA’s Juno spacecraft supports the theory that this ribbon is a signature for Jupiter’s magnetic equator. 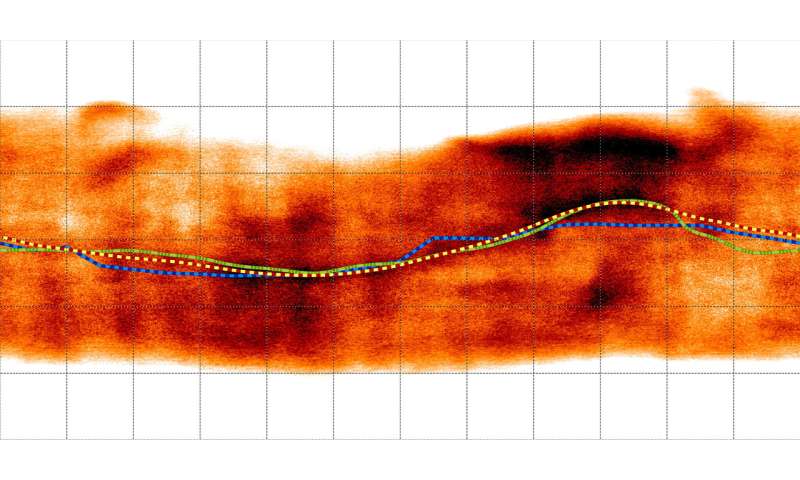 Three different measurements of Jupiter’s magnetic equator: the first, in blue, is the best past estimate of what was thought to be the equator using ultraviolet light; the second, in red and yellow is the location of the dark ribbon seen in this map; the third is the new measurement of the magnetic equator recently measured by the Juno spacecraft.

Lead author Dr Tom Stallard, Associate Professor in Planetary Astronomy from the University of Leicester, said: “The first time we saw the dark ribbon winding its way around Jupiter in our data, we felt sure we were seeing something special at Jupiter. The result was so startling and yet clear, it took us all by surprise, and we strongly suspected and speculated that the feature was caused by Jupiter’s magnetic equator.

“It was a great relief to us that a few months before our paper was published the first magnetic model of Jupiter was released from the Juno spacecraft, providing an unprecedented view of Jupiter’s equatorial magnetic field, and the measured magnetic equator lined up almost exactly with our dark ribbon of emission.

“Our observations, along with the recent measurements by Juno spacecraft, have surprised us. Some of Jupiter’s auroral regions were highly complex, and so many earlier models predicted a very complex magnetic equator to match with this, but the magnetic equator is actually shaped much more like that of Earth.

“Scientists working with Juno have suggested that this may indicate that the complex distortions in Jupiter’s magnetic field may occur at relatively shallow depths in the planet. Our measurements also support that, because even though the equator is surprisingly simple, we see lots of complexity in the ionosphere between the equator and the pole. This suggests Jupiter’s magnetic field in these regions is much more complex than that of Earth. It also suggests that as Juno takes higher resolution observations, it will continue to reveal even more fine scale complexity.”

The scientists used 13,501 images of H3+ emissions taken over 48 nights between 1995 and 2000. This helps to reveal the rate of change in Jupiter’s complex mid-latitude magnetic field and provides insight into what happens deep inside Jupiter. It also suggests that the location of Jupiter’s magnetic equator has remained stable over the over the 15 years separating these two independent measurements.

The observations identified a number of other localised dark regions, including the area identified last year as the Great Cold Spot by the same team of scientists. The Great Cold Spot is also thought to be caused by the effects of the magnetic field of the planet, with its spectacular polar aurorae driving energy into the atmosphere in the form of heat flowing around the planet and creating a region of cooling in the thermosphere.

This research was part funded by the Science and Technology Facilities Council part of UK Research and Innovation.