Astronomers have used NASA’s Chandra X-ray Observatory to discover a ring of black holes or neutron stars in a galaxy 300 million light years from Earth.

This ring, while not wielding power over Middle Earth, may help scientists better understand what happens when galaxies smash into one another in catastrophic impacts.

In this new composite image of the galaxy AM 0644-741 (AM 0644 for short), X-rays from Chandra (purple) have been combined with optical data from NASA’s Hubble Space Telescope (red, green, and blue). The Chandra data reveal the presence of very bright X-ray sources, most likely binary systems powered by either a stellar-mass black hole or neutron star, in a remarkable ring. The results are reported in a new paper led by Anna Wolter from INAF-Osservatorio Astronomico di Brera in Milano, Italy.

Where did the ring of black holes or neutron stars in AM 0644 come from? Astronomers think that it was created when one galaxy was pulled into another galaxy by the force of gravity. The first galaxy generated ripples in the gas of the second galaxy, AM 0644, located in the lower right. These ripples then produced an expanding ring of gas in AM 0644 that triggered the birth of new stars. The first galaxy is possibly the one located in the lower left of the image. 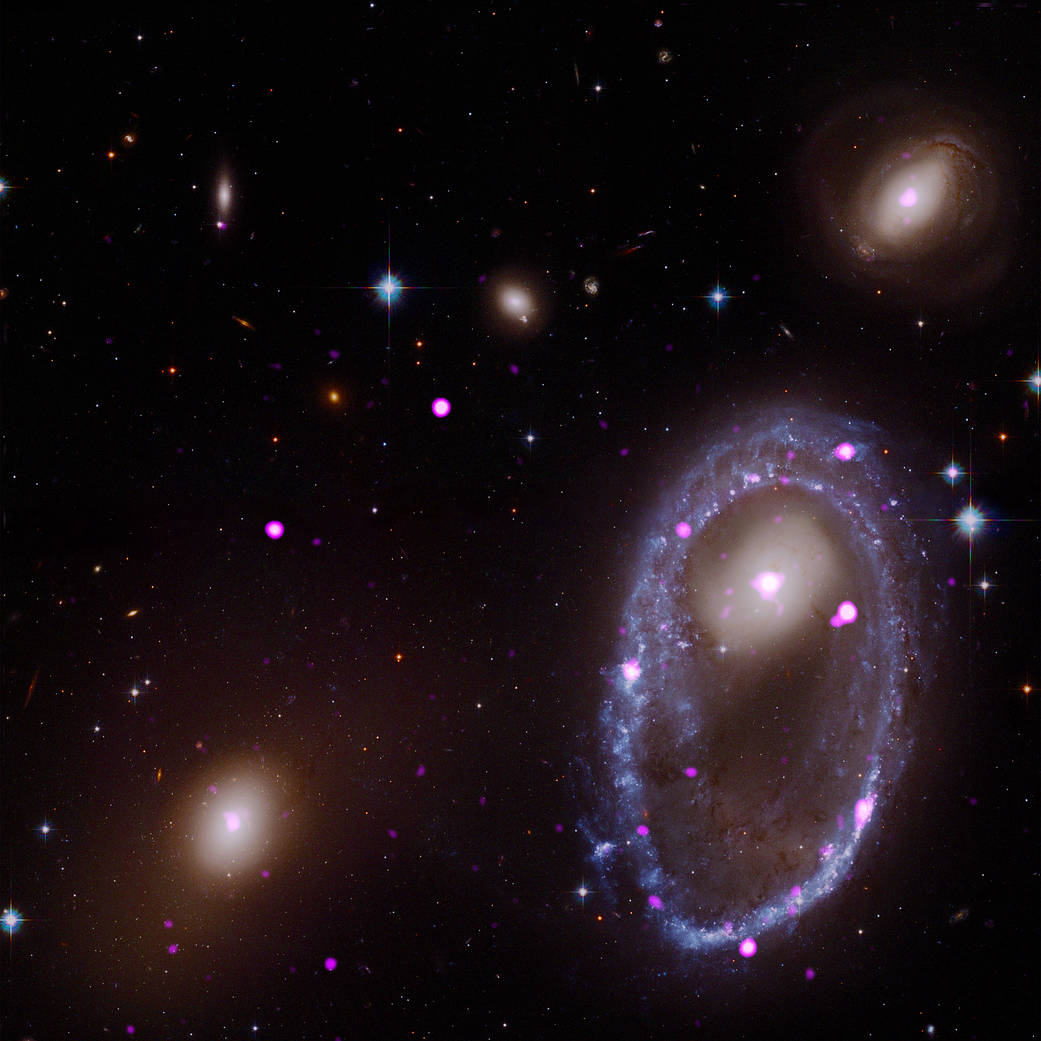 The most massive of these fledgling stars will lead short lives — in cosmic terms — of millions of years. After that, their nuclear fuel is spent and the stars explode as supernovas leaving behind either black holes with masses typically between about five to twenty times that of the Sun, or neutron stars with a mass approximately equal to that of the Sun.

Read More: 4 cosmic phenomena that travel faster than the speed of light

Some of these black holes or neutron stars have close companion stars,and siphon gas from their stellar partner. This gas falls towards the black hole or neutron star, forming a spinning disk like water circling a drain, and becomes heated by friction. This superheated gas produces large amounts of X-rays that Chandra can detect.

While a ring of black holes or neutron stars is intriguing in itself, there is more to the story of AM 0644. All of the X-ray sources detected in the ring of AM 0644 are bright enough to be classified as ultraluminous X-ray sources (ULXs). This is a class of objects that produce hundreds to thousands of times more X-rays than most “normal” binary systems in which a companion star is in orbit around a neutron star or black hole. Until recently most astronomers thought that ULXs generally contained stellar-mass black holes, with the possible presence in some cases of intermediate-mass black holes (IMBHs) that contain over a hundred times the mass of the Sun. However, this thinking was overturned when a few ULXs in other galaxies, including M82 and M51, were found to contain neutron stars.

Several other explanations besides IMBHs have been suggested for the intense X-ray emission of ULXs. They include the unusually rapid growth of the black hole or neutron star, or geometrical effects arising from the funneling of infalling material along magnetic field lines.

Read More: If There Is A Multiverse, Can There Be Life Too?

The identity of the individual ULXs in AM 0644 is currently unknown. They may be a mixture of black holes and neutron stars, and it is also possible that they are all black holes or all neutron stars.

Not all of the X-ray sources in the image are located in the ring of AM 0644. One of the sources is a rapidly growing black hole that’s located well behind the galaxy at a distance of 9.1 billion light years from Earth. Another intriguing source detected by Chandra is a growing supermassive black hole located at the center of the galaxy.

In the new study, the researchers also used Chandra observations to study six other ring galaxies in addition to AM 0644. A total of 63 sources were detected in the seven galaxies, and 50 of them are ULXs. The authors see a larger average number of ULXs per galaxy in these ring galaxies than in other types of galaxies. Ring galaxies have stimulated the interest of astronomers because they are ideal testbeds for examining models of how double stars form, and understanding the origin of ULXs.

The paper describing the study of AM 0644 and its sister ring galaxies appeared in the August 10, 2018 issue of the Astrophysical Journal and is available online. The co-authors of the paper are Antonella Fruscione from the Harvard-Smithsonian Center for Astrophysics in Cambridge, Mass., and Michela Mapelli from INAF-Osservatorio Astronomico di Padova in Padova, Italy.

This article originally published in Nasa